*edit:
What this means is that the card will go into place, and lock without its "carrier" or whatever that holds the other two xio cards if you have em. This means
that two dual height Vpro graphics cards, can be used. And the XIO locking mechanisim on that block connector is retained, and able to be actuated, so they are
locked in like sgi wanted em to be.
What I have here was just a working test too, I plan on rigging up a little plastic screw down handle thing, that the other boards have, with the spares from the XIO tray. So it will look all "sgi" on the back.

Its been a while since I've had some SGI in my life, and even when i did, I never got to play with the hardware like I'd like to. I gotta say, this stuff is freaking beautiful. Every little detail in the construction, from the board layouts, backing plates, connectors. Its so well planned, and executed in an elegant manner. I mean theres not a single ribbon cable in the whole octane case. Even new top of the line hardware doesnt touch the build quality of this tank.

dont mind my rant. I havent had a chance to test the Vpro setup extensively, but seeing as it worked fine for me and others, without being locked in place, I doubt it will have any problems. Haha, I havent been able to test it, because I cant install irix on the octane yet, and that comes to my only gripe about the thing, who the hell wouldnt put an interal cd drive in a top of the line workstation, at a time when cd's were huge! So, I have an old 50pin cd dangling off of the indigo2 and I'm copying the cds over the network to a linux machine that will function as the install server. Jeez what a pain. My next project is going to be shoehorning a slot load atapi cd into the top of the case somehow, and cleanly integrating it with the scsi bus, to maintain the ribbon free cleanliness of the case.

But yeah, back to the vpro, heres some shots of the lock rod on the back in locked and unlocked positions. If anyone wants their Vpro's modded, for use in a dual setup, I will gladly perform this modification in trade for sgi goods.

ok, heres the top card in and locked 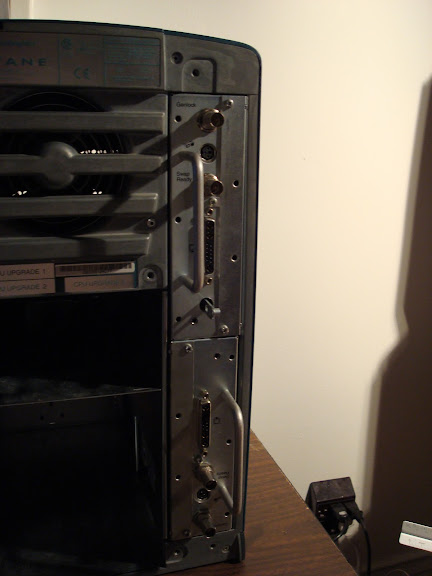 Close up of locked 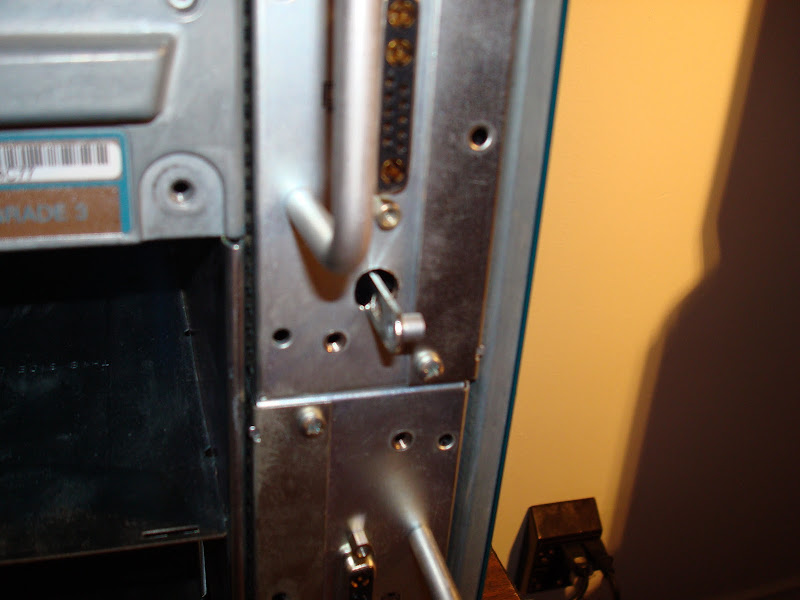 Close up of unlocked 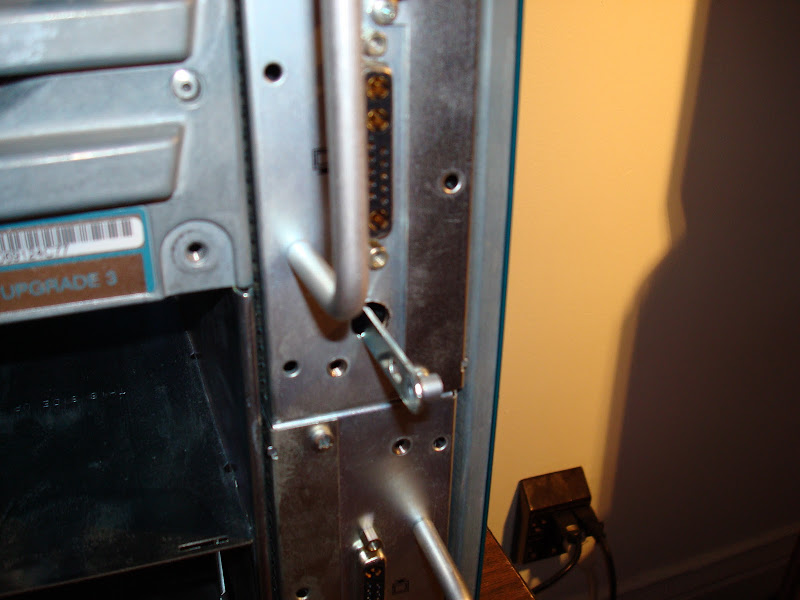 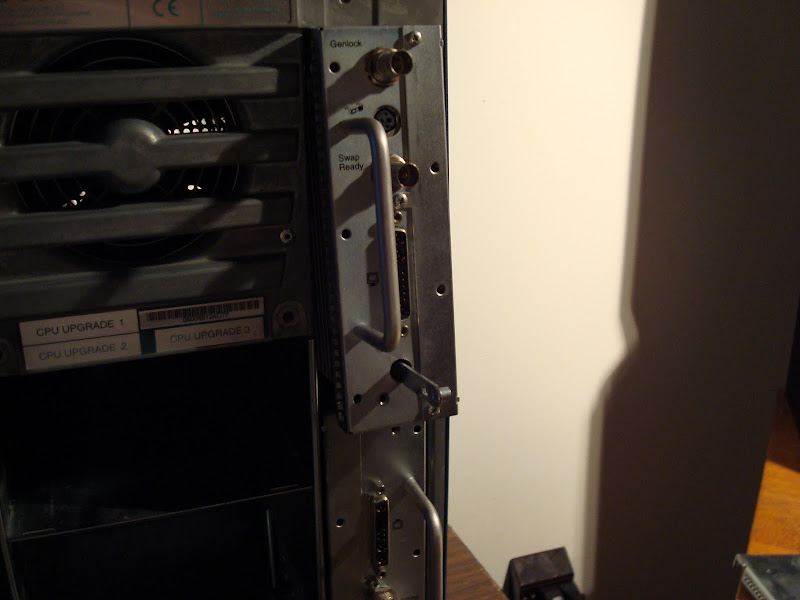 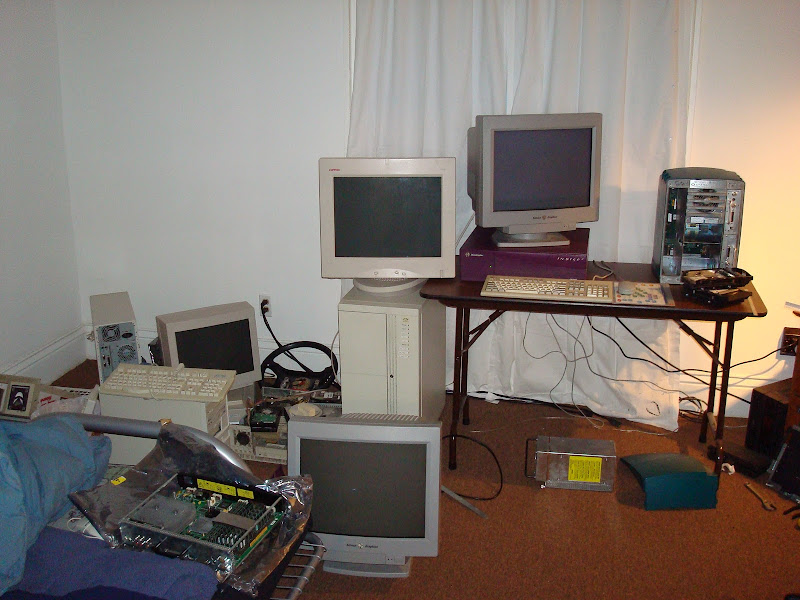 I agree with you - I love the Octane. I really like how well made those things are! The lack of an internal CD drive isn't a big deal - there is an external SCSI connector on the back, so connecting one isn't hard. The only frustrating thing is that it's 68 pin. I'm actually using a 68pin Plextor SCSI drive mounted in an old Apple CD300 case, with a 68pin SCSI ribbon cable leading through the back of the cabinet, and plugging into the port on the Octane. It's a kludge, but it works fine.

Where in NY are you? Anywhere near Schenectady?

Wrote the following at April 14, 2010, 4:38 p.m...
yeah, heres what im working with right now, gotta get the 68 pin to 50 pin cable though. I'm going to put a cd burner in there as well, and maybe a card reader, with a ide-scsi adapter on the top. Then I could have one enclosure with all my removable media needs. 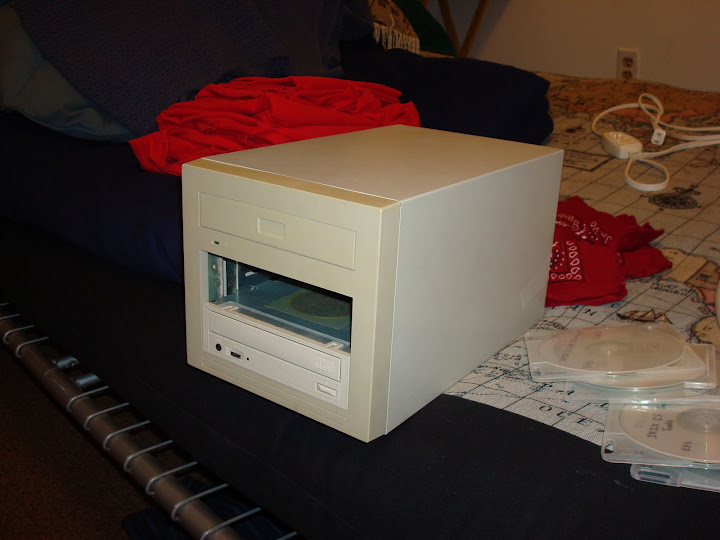 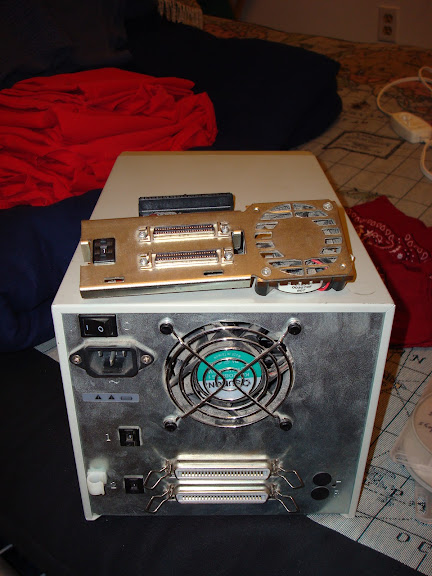 I think im going to swap the centronics backplane for the hd50 one, I just like the sun hd50 connectors better. The centronics ones come disconnected if you jiggle them.

oh yeah, and im from ithaca, ny. cool to know theres some sgi fans up here. I'll try to get a pic of the mechanism up, when I get a chance to yank it back out of the machine. I'm installing right now, dont want to turn it off.

Wrote the following at April 14, 2010, 5:03 p.m...
yep, its pretty nice here, I just moved back after being gone for a while. Lots of nice outdoors stuff to do. Plus, the air is clean and the people are friendly.

Wrote the following at Dec. 3, 2015, 11:38 a.m...
Honestly if you just remove the XIO carriers and carefully insert them (starting from the bottom), they lock in quite well. That's all I did. I wouldn't recommend you transport it that way, but if you just have it sitting on your desk it shouldn't go anywhere. You can also add a metal bracket to hold them in place too if you wanted.

necron2600 wrote: Also, I read somewhere online that to run Dual Vpro graphics you need to have a Dual CPU. Is this true? (I only have single CPU Octanes)

Wrote the following at Dec. 4, 2015, 9:01 a.m...
Interesting...I'm feeling like I have done dual head vpro with single cpu before but perhaps not...however it's possible that it's one of those "required" but works anyway sort of scenarios...God knows the SGI world is full of those.

Zerolapse wrote: In any case...single CPU in an octane isn't nearly as fun as two anyway.

Nor as useful. Watching the load graph, mplayer uses most of the 1st CPU. Dual all the way.